The Sultan Ahmet Mosque was built between 1609-1617 by the Ottoman Sultan Ahmed I on the historical peninsula of Istanbul. It is a work of architect, Sedefkâr Mehmed Aga. It is called “Blue Mosque” by Europeans because the mosque is decorated with blue, green and white colored Iznik tiles and the inside of half dome and big dome is decorated with blue weighted pencil works. By the conversion of Hagia Sophia into a glass museum in 1935, it reached the position of the main mosque of Istanbul.

In fact, the Sultan Ahmet Mosque is one of the biggest structures in Istanbul. The complex consists of a mosque, madrasahs, sultan’s pavilion, bazaars, shops, baths, fountains, tombs, hospitals, primary schools, hospice and rented rooms. Some of these structures have not survived to our day.

The most important aspect of the structure’s architectural and artistic feature is its decoration with more than 20.000 Iznik tiles. The ornaments of these tiles used traditional plant motifs in yellow and blue tones, making it more than just a place of worship.

The diameter of the central dome at a height of 43 meters is 23.5 meters. The inside of the mosque is illuminated with more than 200 colored glass. The writings were written by Seyyid Kas?m Gubari of Diyarbak?r. It forms a huge complex together with the surrounding structures and Sultan Ahmet is the first structure with six minarets in Turkey.

The design of the Sultan Ahmet Mosque marks the summit of 200 years of synthesis of Ottoman mosque architecture and Byzantine church architecture. In addition to having some Byzantine breeches from neighboring Hagia Sophia, the traditional Islamic architecture is also seen as the last great mosque of the classical period. The mosque’s architecture was quite successful in terms of reflecting the great master architect Sedefkar Mehmet Aga’s “greatness in size, majesty and splendor” idea.

Apart from the addition of small paddles above the corner domes, the front of the large front courtyard was made in the same style as the Suleymaniye Mosque. The courtyard is nearly as wide as the mosque itself and has been turned into a continuous arch. There are ablution stalls on both sides. The size of the large hexagonal fountain is relatively small considering the size of the courtyard. The narrow monumental passage leading to the courtyard stands architecturally different from the arches. The half-dome is crowned with a smaller protruding dome and has a fine stalactite structure.

The interior of the mosque is decorated with more than 20 thousand tiles produced from 50 different tulip designs in Iznik. The Chinese in the lower levels are traditional, the designs of the Chinese in the gallery are spectacular and magnificent with the drawings of flowers, fruits and servants. More than 20 pieces of tiles were produced in ?znik under the supervision of the tile masters Kasap Hac? and Cappadocian Baris Efendi. Although the amount to be paid per tile was regulated by the order of the Sultan, the price of tiles increased over time, and as a result, the quality of the tiles decreased over time. Their colors and polishes are faded. The Chinese on the rear balcony wall are the tiles recycled from the harem of the Topkapi Palace, which was damaged in the fire of 1574.

(The dome and ceiling of Sultan Ahmet Mosque. Sultan Ahmet Camii is part of the UNESCO World Heritage List in 1985 named as Zones historiques d’Istanbul.)

The higher of the interior is dominated by blue paint, but it is of low quality. More than 200 mixed speckled glass spots natural light, today they are supported by chandeliers. The discovery of the use of ostrich eggs in the chandeliers to keep the spiders away prevented the formation of spider webs. Most of the Quran calligraphic line decorations were made by the greatest calligrapher, Seyid Kas?m Gubari. The places are covered with carpets renewed constantly by helpful people. Many large windows give a spacious feeling. The floor-opening pop-up windows are decorated with a floor covering technique called “opus sectile”. Each curved section has 5 windows, some of which do not pass the light. Each half-dome has 14 windows, and the central dome has 28 windows, 4 of which are blind. The colored glasses for the windows were gift from Venice to the Ottoman sultan. Most of these colored glasses have been replaced by modern versions that are not artistic today.

The most important element in the glass is the mihrab made of carved marble with fine workmanship. The adjacent walls are covered with ceramic tiles. But many windows around make them less glamorous. To the right of the mihrab is a richly decorated pulpit. The mosque was designed in a way that everyone can hear the imam even in the most crowded gathering. The Sultan cupola is in the southeast corner. A platform consists of two small restrooms and a shed, and there is a passage to the lodge in the southeastern upper gallery of the sultan. These restrooms became the administrative center of the vizier during the revolt of the janissary in 1826. The Sultan cupola is supported with 10 marble columns. They are decorated with emerald stones, roses and gilds. Some verses of Quran are tattooed with gild. 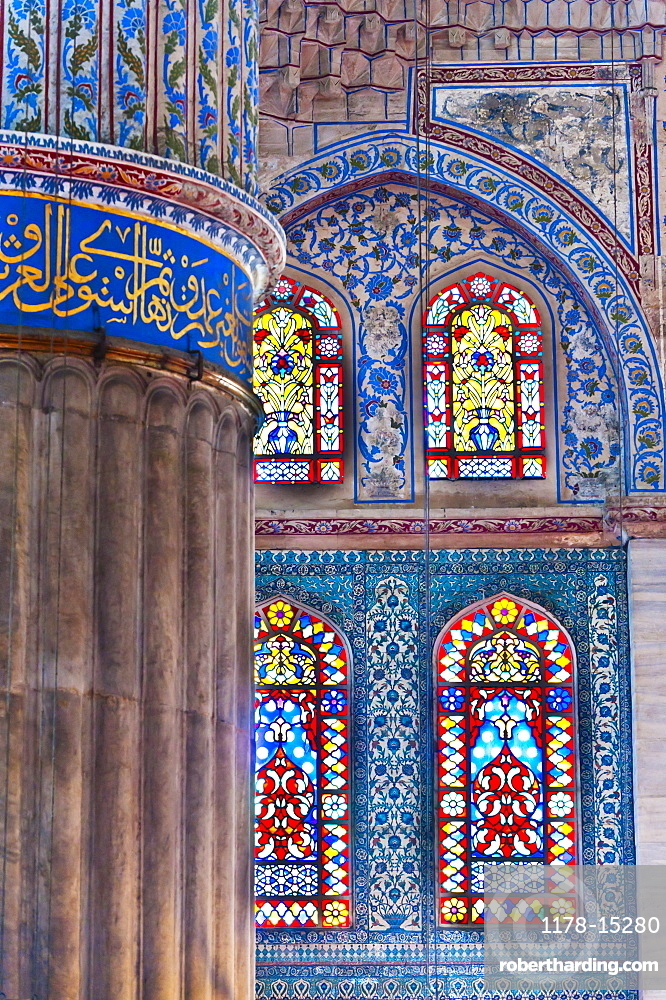 Many lamps inside the mosques are covered with gold and other precious of those times, and glass sashes with ostrich eggs or crystal balls in it. All of these decorations were either removed or looted.

In the large tablets on the walls, some calligraphic verses from the Qur’an are written. These were originally made by the great calligrapher Diyarbakir Kasim Gubari of the 17th century, but are recently removed to be restored.

The Sultanahmet mosque is one of the four mosques with 6 minarets in Turkey. The other three are Tasoluk New Mosque in Istanbul Arnavutköy, Sabanc? Mosque in Adana and Mu?dat Mosque in Mersin. When the number of minarets emerged, the sultan was accused of arrogance because at that time, there were 6 minarets in the Kaaba in Mecca. The sultan solved this problem by having (Masjid Haram) make the seventh minaret the mosque in Mecca. The 4 minarets are on the corner of the mosque. Each of these minarets in the shape of a pen has 3 balconies. The other two minarets on the front hill have two balconies.

Until recently, the muezzin had to go out with narrow spiral staircases five times a day, today a big audio distribution amplifier has been implemented and the prayers are heard in the old distant parts of the city. As the sun sets and the mosques begin to illuminate brightly with colorful projectors, crowds, both Turks and tourists, gather in the park and face to the mosque to listen to the evening prayer.

Sultan Ahmet Square is one of the most important squares of Istanbul. Known as the Hippodrome in the Byzantine period, it was known as the Horse Square -also referred to as Roman Circus- in the Ottoman period.

The important buildings and memorials of the Byzantine remained in the vicinity of the Hippodrome. The Imperial Palace, known as the “Great Palace”, started from the side of the Hippodrome, reaching down to the sea. There is only a mosaic panel of a large hall survived to this day. The most important square of the city was the Agusteion and the Milenium victory jewelery between here and the street. The road to Rome was the starting point, and the first milestone was here. Baths, temples, religious, cultural, administrative and social centers were settled in this area. The district continued its importance in the Byzantine and Turkish eras. The Hagia Sophia, Sultan Ahmet Mosque, Museum of Turkish and Islamic Arts, the Basilica Cistern are here around the Hippodrome. The main streets of the city (down to the port and heading west to the city walls) would start from the hippodrome and follow the slopes. The roadsides were surrounded by commercial establishments and residences. The side roads were narrow and some of them lined up downhill. The highway pavements were sometimes built in two floors, with galleries.

The hippodrome in the period of the Roman Empire and later during the Byzantine Empire kept its importance until the 10th century as the city’s meeting, entertainment, amusement and sports center. Alongside the car races, there were musician ensembles, dancers, acrobats, fighting shows with wild animals, and meetings. For all these activities, there were plenty of holidays during the Roman period.

The Hippodrome was also the center of the uprisings against the state during the Byzantine era. The Nika Uprising that took place in the reign of Iustianus is one of these and was suppressed by the killing of 30,000 of the rebels by the Commander Belisarios. Later in 1185, the Emperor Andronikos Komnenos was also lynched here. During the Ottoman period, the Janissary rebellions took place in this region, for forty days and forty nights, princes circumcised weddings, festivals were held here. The 1920 Sultanahmet rally where Halide Edip speaks against the occupation in Istanbul was also held here.

There are the Basilica Cistern and Binbirdirek Cistern next to the Sultanahmet Square. There are 224 columns in the Binbirdirek Cistern and it is estimated that it was built in the 4th century. The Basilica Cistern is made up of 336 columns and was also made in AD (527-565). These cisterns, which were restored twice in the Ottoman period, are now open for public use for cultural activities.

THE BEST BEACHES IN TURKEY

dizicentral - September 10, 2018
0
CUKUR PRE-SEASON SUMMARY If, like me, you have become a passionate devotee of “CUKUR”, this extraordinary tour de force from Ay Yapim, you will be...