Murat was born in Diyarbakir. Although he is known as Muray Aygen his real name is Murat Aglatci. He studied Biology at Istanbul University before going on to the Mimar Sinan University State Conservatory to study Musical Theatre and Acting. He then gained a Masters Degree in Opera.
Between 1992 and 1995 he worked at Istanbul Metropolitan Municipality City Theatres as an actor, choreographer, and dancer. In 1994 he worked at Capa Medical Faculty as a Speech Therapist. In 1995 and 2000 he was a soloist in State Opera and Ballet. In 2000 and 2001 he worked as a lecturer at Istanbul University on the Theatre Department. He has done lots of producing, editing and directing in the theatre and also his own theatre company that he founded. In 2010 he partnered with an American company which engages in Social Media Communication.

His first onscreen acting was in a film made for TV, Ankara Ekspesi. In 2008 he appeared in his first TV series Paramparca Asklar as the character Cam. 2009 saw him in another dizi as Doctor Hakan in the series Kuk ve Ates. His only movie on the big screen to date was a good one. Av Mevsimi. I loved that film.

He has worked consistently through more recent years, He was in Medcezir in 2013, Maral in 2015, Bodrum Masali in 2016, and last season was in Istanbullu Gelin where he played the character Can, A lawyer with a talent for singing. 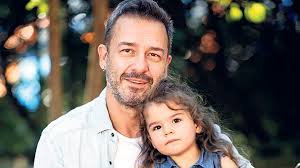 His current project is in the upcoming series Sahim Tepesi, a remake of the US series Falcon Crest. He will play the role of Demir. This dizi has an amazing cast and director and I’m sure will do very well.
In 2010 he married Nihan Asli Elmas. They have a very sweet daughter together called Nil.
He is very active on social media and posts some great images and videos of himself and his family. He has 122k followers, me included, but I’m sure after Sahin Tepesi commences that number will rise. His daughter Nil also has her own account run by Mum.
Murat has been a favourite of mine for a while. I am really excited to see him in his new series. I know his performance won’t disappoint.