Sadly we are here, the final episode of Carpisma. I have not watched this episode and will write as it unfolds. I have also managed to avoid any spoilers, I am just hoping that Veli survives.

So last week ended in the nightclub where Kadir, Zeynep, Cemre and Kerem are enjoying a night out. Cansiz has sneaked behind Zeynep and stabbed her, she collapses to the floor.

Kadir and Veli rush her to the hospital but its too late, Zeynep is pronounced dead. Kadir is devastated. Cemre, Kerem, Chief Haydar and Kadir’s colleagues have all arrived at the hospital and are grief stricken. Kadir sits at the side of her talking to her and asks for more time to be with her.

Meanwhile, Cansiz who is still suffering from the gunshot wounds to his chest tells Cihan to send the video that Zeynep recorded to all her loved ones. Kadir, Veli, Cemre and Kerem receive the message. The video makes Kadir come to his senses a little and Veli too who vows he won’t go anywhere until he has dealt with Cansiz.

Kadir drives to Zeynep’s house. Aylin is sleeping and he crouches down and whispers that Zeynep entrusted her to him and he has one reason to live now.

The next morning at breakfast, Kadir, Serpil, Cemre and Kerem are sat and Aylin comes downstairs. She knows its something bad, and that her mum has gone and Kadir can’t bring her back. She goes up to her room. Kadir leaves.

Kadir goes to the station and gets the two men who they arrested working for Cansiz to tell him who are his known associates. Meanwhile, Veli too is trying to find out where Cansiz is in the way that Veli knows how. Kadir returns to the nightclub as the owner was on the list he got for associates of Cansiz. The man says he doesn’t know where Cansiz is so Kadir shoots him. As he leaves Veli arrives with his men and tells them to clean up any mess that Kadior has left inside. Oh, bless him Veli covering for Kadir.

Veli finds the doctor that has been treating Cansiz. Of course, the doctor denies knowing Cansiz. In a great scene, Veli exacts his revenge and launches him through a window. Veli means business.

Cemre comforts Aylin as Zeynep wanted and takes Aylin to the park. Aylin wants to go alone with her but Kerem says he will follow them. Meanwhile, Kadir is still visiting all the people whose names are on the list that know Cansiz. Again the man denies knowing him and Kadir shoots him and walks away. Cansiz learns that Veli and Kadir are killing people who work for him. He tells his man to get Aylin and strengthen their position before Veli or Kadir finds them.

Zeynep is taking Aylin to the shop when a car cuts them off. Cansiz’s men take Aylin. Kerem follows them on his bike and sends the location of where they take her to Kadir. Kadir arrives and they enter the building. There is a phone and Aylin is on video chat with Cansiz. Cansiz will let Aylin go if Kadir kills Veli. Kerem is shocked but Kadir says he has to do it. Aylin is sat talking with Cansiz. They chat about being innocent and having friends. She is so cute and makes Cansiz just think a little. I actually thought this was a great scene between Ali and Gokcen.

Kadir meets with Cansiz, it is being filmed by Cansiz’s man. They talk and Kadir shoots towards Veli twice. Now I’m pretty sure this is a setup and prearranged by Kadir and Veli knowing they would be watched. When Kadir told him Aylin had been kidnapped Veli already knew his reaction wasn’t good enough. He adores that girl and that wouldn’t have been his first reaction when hearing it.

The next morning the news crews are at the scene plus the police. Cansiz watches the news that Veli had been shot and killed, he also sees the video that his man took who confirms that Veli is dead. He calls Kadir and tells him he will send him the location of Aylin.

Kadir arrives and Cansiz is sat alone. Cansiz wants Kadir to kill himself and he promises he will return Aylin to her family. Kadir shoots Cansiz in both feet, then the phone rings, its Veli.

We see that the last man Kadir visited gave him the name and whereabouts of Cihan Cansiz’s right-hand man. Kadir calls Veli and tells him that he needs to kill him to get Aylin, Veli says he is ready to do that, but Kadir won’t and they set up his death with the help from Chief Haydar. While Kadir was going to Cansiz, Veli and Kerem arrived at the place where Aylin was held. They manage to get her out.

Veli and Kerem take Aylin home but even seeing uncle Veli doesn’t make her talk. She won’t talk with anyone and runs to her room. Veli apologises to Serpil for what he did in the past, and we have a little mutual appreciation going as she forgives him and he tells her he has never been as scared of someone as her. When she forgives him Veli’s face lights up.

Kadir has taken Cansiz to the cemetery. He shoots him several times in the chest. Veli arrives and wants to take the gun from Kadir. He tells him that his men have wiped all traces of him from the crime scenes and planted his evidence so it looks like Veli did the killings. Kadir doesn’t want Veli to take the blame but he is adamant that Aylin needs Kadir. Chief Haydar arrives and they take Veli away. Kadir tells him that his resignation will be on his desk in the morning. Haydar isn’t convinced.

Kadir writes Aylin a letter telling her how good the people are around her and how much they love her. They visit Zeynep’s grave together and she goes to the football match.

Kadir goes to visit Veli in prison. He takes a picture that Aylin has drawn. It’s of her and Veli holding hands surrounded by fish. Veli tells Kadir he is moving prisons to be near a friend. Kadir says he hasn’t got any friends, Veli replies just you. They hug each other.

We see Veli arrive at the new prison. He is back to the old Veli. He walks into the cell and there is Demir, Veli has come to kill him.

In the final scene. Everyone has gathered at the beach. Kerem wants to make a speech but is nervous and keeps getting interrupted. He suddenly blurts out Cemre will you marry me? She accepts.

The final shot is an amazing sunset on the beach with them all congratulating the happy couple. 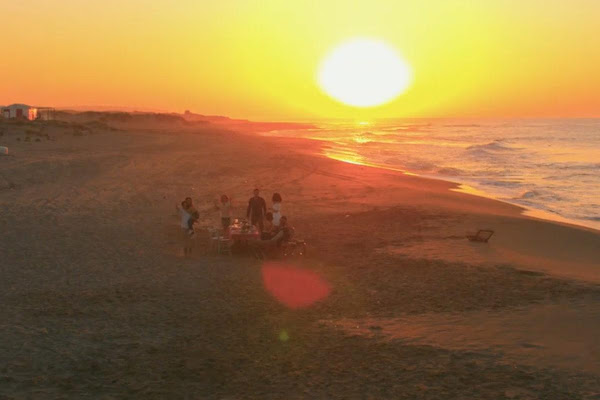 And exhale… wow what a 2 hours and 30 minutes that was. Amazing finale. Sadly Zeynep didn’t make it, but it ended happily for Kadir, Cemre and Kerem.

Veli got the ending I really wanted for him. He is in prison alive and well and shows us again he is the old Veli too as well as the loveable one. This could set it up nicely for him to join Cukur next season. That would be my final wish.

This has been a great series. I’m glad that it’s only done 24 episodes. I think dragging it out to another season would have spoilt it. The acting was amazing. Whatever they all decide to do next in their careers I will be sure to follow them.

You can watch live on Show TV every Thursday at 8 pm Turkish time. Or on Youtube on Show Tv’s official channel.